Hi all, I hope everyone here is enjoying the holiday season.  While LU was still going, I didn’t get a chance to go to Frostburgh, so I decided to “make it” with real LEGO bricks!  Merry Christmas, happy Frostivus, and holidays! 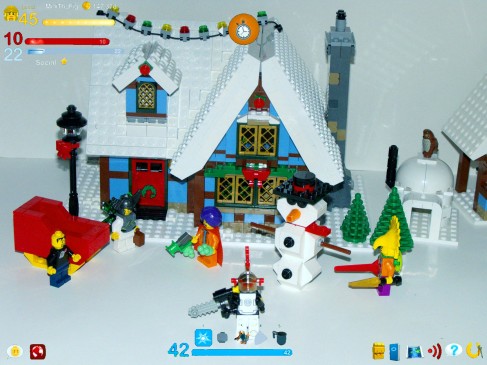 Cuusoo has posted on their blog that they are going to announce the results of their summer review on thursday with a video message.

Its been over 6 months since they entered review, So I am glad to see an update

just as a recap, the projects are, Modular Western Town, The Legend of Zelda, BTTF DeLorean Time machine, and EVE Online – Rifter.

So what do you guys think the results will be?

We are coming up on a year without LU and a year of posts on the Luprechaun. I’m going to make some meta posts as we come up on the anniversary to review what’s happened so far on the Luprechaun, links to each post and highlights that I think you should check out if you haven’t already. The blog already is taking a new direction, yet still firmly rooted in LU with lots left to cover and I want to thank everyone so far 🙂  Hope you are having a great holiday and the festive season treats you well!

4) PC Gamer interview with Mike Rayhawk
https://luprechaun.wordpress.com/2012/01/31/pc-gamer-interview-with-mike-rayhawk/
Must read interview that has lots of tidbits of what might have been

10) Test Camera Footage
https://luprechaun.wordpress.com/2012/02/01/test-camera-footage/
Footage of the beta camera in action with more discussion and info on how it would have worked

Around June I had got to talking to the Community team about rebooting the Sector 6 level. At that point the team had all but dissolved with just a couple of active players and only a few who had even turned the game on. It wasn’t meant to be but here is a level idea that I pitched that would embrace properties as a building platform. Some parts are abbreviated as it was conversation about individuals and not pertinent to the level description.

…..
I got to thinking, what would I really like to do and it occured to me, a fig inside a huge mouth. Like a whale mouth. I have lots of ideas on how to make this fun, some teeth would be smashables, there would be germy creatures in fluid pools, there would be a higher area on the roof of the mouth where some creatures had escaped and live, and you have to find a way to get the tongue to take you up there. I’m jazzed about it and even if I don’t do it for this contest I’ll still get it done eventually.

… the idea of rebooting the S6 level with a minifig to scale in a room. So all the constructions, table, bed, etc would be real size and a fig would be the size of a real fig. Think Toy Story!

I like this idea a lot. So I just let it cook for a bit, been playing the game, and went through all the LUP levels. There was plenty I didn’t like, but what I did like was the levels that tried to integrate themselves into the game, like Robot City, and levels that had a bit of a challenge, like that garden one with the snails. Stuff I didn’t like was the simplicity and the sloppy terrain editing.

A big reason I didn’t want to abandon our original idea was I liked how tightly we tied it into the story. I love the miners corrupted by the Maelstrom. I love the space pioneer aesthetic and all the potential we had.

So to make this work I wanted to figure a way to tie this into the game somehow….. Our previous level idea, the current LUP levels, the property ideas, and the new Toy Story idea….

The player starts in a large dark toy box, a jumbled ground surrounded by Maelstrom infected minifigs. These are basic, plain minifigs, coming at the player like slow shambling zombies. They are very easy to defeat and pop pretty much like bubbles. There is a smashable wall at one end and the player exits into the room. Occasionally a new token drops with the S6 logo on it.

The room is huge, like a stadium and in the centre is a table. The player can make out some large side tables or drawers on either ends of the room as well. The mission giver is in the outside the toybox and tells the player that he needs help rescuing the other toys from the infected toys. The first toy to resuce is on top of the table and the reward will be one of the rocket modules.

To get up on the table the player has to make a complicated launcher, either one that migrates closer to the target each time it’s smashed, like the Paradox Resarch Station blue brick challenge and the Crux Prime drop ship puzzle, or having to smash a couple of smashables at the same time to construct one large bouncer. This will reveal a pet launcher that falls apart pretty quickly, so unless the player is really quick on the draw and can whip out a pet snappy they will have to try again.

The edges of the room get progressively nasty as far as toys go. If inside the toybox is level zero ( pre-faction Avant Gardens action ), then just outside the toybox and under the table is level one. At the edge of the room it should get to about level two, with appropriate aggro radius so the monsies don’t stray too close to the player. All the while we are still getting those S6 tokens.

On top of the table is about level 1-2 baddies. There is a lamp or something that the prisoner figs are tied to by some larger infected toys. These are some generic toys that any kid might have in their toybox. Action figures, toy cars, stuffed animals, fashion dolls, all done to scale to a minifig, so lots of cool modelling opportunities. This puzzle resets itself so the player gets the reward right away and doesn’t have to go back to the mission giver for the next step. He’s instructed to go into the AQUARIUM to rescue the next fig.

The vendor is on the table as well. Here you use the S6 tokens you collected as well as cash to buy items! You can buy the one other scuba part, some consumables, a S6 tshirt, the S6 car parts, one of the S6 rocket parts as well as a Maelstrom Infused Ninja hood ( maybe a new colour? ) The vendor’s name is Vic Lug.

Once you’ve got the launcher made to the aquarium, you find your way into the aquarium through a broken air pump at the top. The gravity inside is a bit off, sort of like moonbase. Inside are some bad fishes, some real bad clams that snap a lot when you get too close, a real nice octopus that shoots out inky imagination, a sweet mermaid that you can build if you have her head from Gnarled Forest. The fig to rescue is being held captive by a Maelstrom infected Angler Fish. Little nod to both ND and the Beta Blockers there. This section is a solid level 2.

Your rescued fig gives you a clicker ( 1×2 printed tile ) and tells you that you have to go into the TELEVISION SET to rescue the last fig. Back on the table you use your clicker to zap some kind of smashables until you can build the launcher to the tv. You fly to the bottom edge of the tv table, so you can walk up to the actual screen. It’s very similar to the Ninja forcefields with a flickering picture of King Kong in a city. You need your Maelstrom infused Ninja hood to get through this screen. To have the hood in the store we would have to do some serious chatting with the powers that be, as this can effect balance outside the game more than anything, but it would be great to take some unique items outside of the level into the rest of the game.

Once you pass through the screen you are into something that looks a lot like microscale. The player has to battle a King Kong while smashing buildings all the while. There could be little airplanes that attack the player as well as tanks on the ground that shoot at them. KK has some serious good drops that should take care of most of the players expenses at the vendor, but if they want to buy the whole car or shirt then they will have to come back at least one more time, or take out a lot of other baddies. The final rescued fig, a beautiful blonde of course, will give the player the final rocket piece.

Last week, LEGO created quite a stir when they pre released images of the series 9 Minifigs.. from the back…

Infinite number of win in this group..

I must say these look cool,(that purple potion vial is SWEET!) but the changes to the distribution mean that for some of these there’s literally only two per box….